The Fomena constituency office of the governing New Patriotic Party in the Ashanti region has been rebranded NDC by some disgruntled supporters of the NPP.

The party members are accusing their leaders of deploying illegitimate means to impose the Fomena constituency member of parliament on them ahead of the party’s polling stations election.

The allege the party’s national elections committee is aware that Mr. Andrews Amoako Asiamah who was sacked from the party during the 2020 elections for contesting as independent candidate in line with the party’s constitution is returning to contest election 2024 on the ticket of the party.

The said the national executives of the party have given the MP who is not a member of the party the opportunity to form a team of five each for every polling station in the constituency contrary to the party’s constitution. 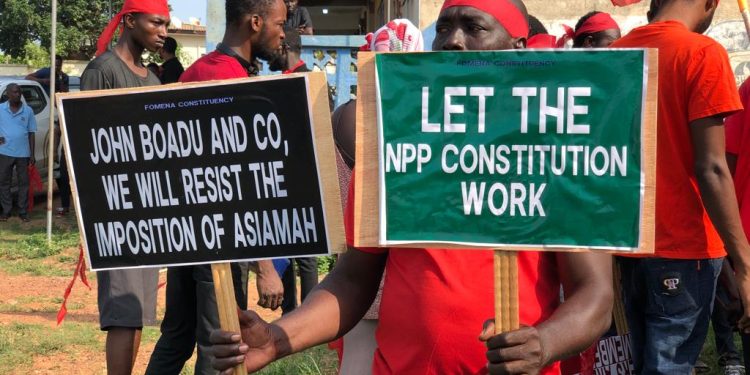 The aggrieved party members believe both regional and national executives of the party are behind this move.

“We will not vote for the NPP in the next elections. We will vote for John Mahama because at least, he has built a modern hospital for us,” one of the angry supporters said.

The leadership of the party in the constituency is to comment on the development.

A member of the National Democratic Congress (NDC) in Tepa in the Ashanti Region has cursed the party’s regional and...

Chairman of the National Democratic Congress, Samuel Ofosu-Ampofo, has indicated that the opposition party has become a formidable force to...

Pollster Ben Ephson has advised former President John Dramani Mahama to desist from throwing his weight behind any candidate in...

I was advised against criticising NPP government because they are vindictive