Vice President Dr. Mahamadu Bawumia was spotted aboard a local flight on an in-country flight.

A photo shared by journalist Manasseh Azure Awuni on social media disclosed that the Tamale-bound flight took off in the morning of Saturday, November 26.

A smiling Bawumia is strapped with his seat belt aboard the Africa World Embraer 145 plane.

He is without a passenger on the double-seat row with his security aide seated right behind him.

Manasseh captioned the photo thus: “This morning, those of us on board Africa World’s Embraer 145 commercial flight to Tamale were joined by an unexpected passenger.

“I don’t know how often it happens, but this is the first time I have heard or seen Ghana’s president or vice president on a local commercial flight,” the post added.

The photo has generated divided reactions with those praising his gesture whiles others are dismissing same as mere theatrics and actions meant to show off.

For others, they point to how leaders in other jurisdictions often ride bicycles and board buses and trains to and from work.

Find the photo as shared by Manasseh: 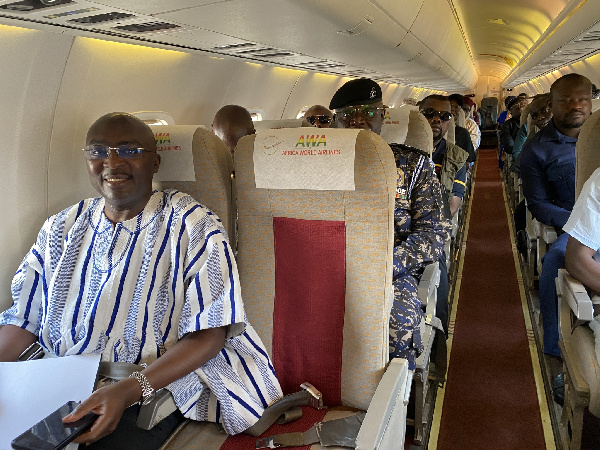 Below are some of the reactions:

We have everything, let’s redefine our narrative – Bawumia

One sided journalist, get your facts right before you talk – Titus Glover clashes with Roland Walker

Vice President Dr Mahamudu Bawumia has said it is time for Africa to change the narrative of poverty and underdevelopment...

We have everything, let’s redefine our narrative – Bawumia

The continent has every ingredient needed to be prosperous, and cannot continue being known for poverty and underdevelopment, Vice President...

Vice President Dr Mahamudu Bawumia says Africa needs between US$130 and US$170 billion annually to bridge its infrastructure gap and generate sustainable...

The Vice President, Dr. Mahamudu Bawumia has proposed three broad areas of focus, which he believes will help the African...

Sancho could return from United exile to face Reading

Mario Martin after his Madrid debut: “I’m going to frame the shirt”

Cocoa bills: Banks should gear up for write-offs – Bright Simons