The 63-year old British trainer is out of Ghana’s technical team set for the 2022 FIFA World Cup tournament.

Christopher Hughton who was expected to lead the West African Country to their fourth FIFA World Cup tournament having secured qualification ahead of Nigeria in a two-legged affair last two months now says NO. The Black Stars of Ghana held the Super Eagles to a goalless draw game in Kumasi at the Baba Yara Sports Stadium but registered first goal in Abuja to settle on a 1-1 draw following Thomas Teye Partey’s 12th minute goal.

What Kufuor said about nationality switches of Odoi, Tariq Lamptey, Eddie Nketiah, others

At was earlier reported, that Chris will take charge of the team after the World Cup qualifiers against Nigeria, since Otto Addo still has job to do with Dortmund.

However, information on the desk of Ghanasportscenter.com has it that the Ghana Football Association has completed talks with Otto Addo. With the German top-flight side approving the former Black Stars player to led Ghana through the 2023 Africa Cup of Nations qualifiers and Qatar 2022.

The news, which did not go well with Chris Hughton has seen his withdrawal from the technical team.

Ibrahim Tanko who was previously worked with the Black Stars under Coach Kwesi Appiah will form partnership with the technical team as they aim at having a successful campaign in Qatar as compensation for their abysmal performance in the 2021 Africa Cup of Nations tournament in Cameroon.

Chris Hughton is currently unattached but still has eyes on Managing an English Premier League club next season.

Abronye hot as young man emerges to unseat him 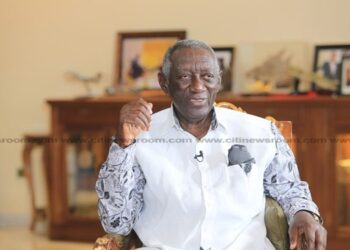 What Kufuor said about nationality switches of Odoi, Tariq Lamptey, Eddie Nketiah, others

Former President, John Agyekum Kufuor has encouraged foreign-born players of Ghanaian descent to welcome the chance of playing for the...

AS Roma coach Jose Mourinho has hilariously revealed why he bought a pair of new trainers for Ghana and Black...

Politics and football are like siblings because they both need each other to survive, especially in our part of the...

Black Stars head coach, Otto Addo is set to announce his squad for the 2023 African Cup of Nations. According...

Abronye hot as young man emerges to unseat him

Let the blood flow – How politicians, businessmen and others suffered in 1979