A member of the governing New Patriotic Party and MP for Assin Central, Kennedy Agyapong, says he supports calls for the removal of Dome-Kwabenya MP, Sara Adwoa Safo.

He said his stance is based on her treatment of the party regarding her return to the country and presence in parliament to support the majority caucus in voting for the controversial E-levy.

Speaking in an interview on Asaase Radio, Kennedy Agyapong said Adwoa Safo’s recent conduct towards the party is disrespectful and must not be countenanced.

He said calls for her removal are in the right direction, and he fully supports it.

“I think she is wrong. She should rather apologize to the party. They [NPP] should stop begging her. I support calls for her removal if she doesn’t come but to sit there [in the US] and make demands.”

According to Kennedy Agyapong, Adwoa Safo has made some demands on the government which he believes are untenable.

“Adwoa is saying that before she comes, we have to remove Alex Afenyo-Markin as Deputy Majority leader and announce it. Another demand is that if she isn’t given what she wants, we are not going to get the E-levy passed and if the E-levy doesn’t pass, we will go to IMF,” he added.

The Assin Central MP further indicated that she was given GHS 120,000 by the Chief of Staff, Akosua Frema Opare to be deposited in Adwoa Safo’s bank account as part of measures to get her to cooperate with the party, but it seems she is refusing to budge.

Meanwhile, Adwoa Safo’s constituents are split over calls for her to be removed from Parliament.

While 47% of residents of the Dome-Kwabenya do not support the recall of the Sarah Adwoa Safo, 44% are in support of such a call.

This is according to Global Info Analytics, which conducts economic and market research, political risk forecasting.

NPP, the dollar or fuel prices: Who ‘breaks the 8’ first?

The New Patriotic Party's two leading members have been pricked with a circulating document containing respective shares in Databank... 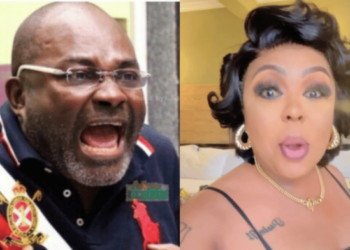 Afia Schwar has resurrected her long-standing beef with Hon. Kennedy Agyapong. The NPP firebrand and the comedienne have been at...

The race to choose the flagbearer of the governing New Patriotic Party (NPP) is heating up though the party's presidential...

Member of Parliament for Assin Central, Kennedy Agyapong, a member of the New Patriotic Party (NPP) has declared his intention...

NPP, the dollar or fuel prices: Who ‘breaks the 8’ first?