The Ghana Police Service has said that its officers in the Upper East Region have shot and killed a suspected robber during a shootout at Nyariga Forest, near Bolgatanga.

According to the Police, the suspected robbers, three in number, were engaged by its officers on patrol, in a shootout, after intelligence gathered showed that the robbers were attacking market women from the Nyariga market.

It, however, indicated that two of the suspected robbers who were engaged in the shootout managed to escape.

“The robbers engaged the Police in a shootout, and one was gunned down in the process, but the two others managed to escape. The injured suspect was rushed to the Regional Hospital for treatment but was pronounced dead on arrival by the medical officer. Meanwhile, his body has been deposited at the Regional Hospital Morgue for preservation.

The Police also urged members of the Nyariga community and its environs to help provide information that will lead to the arrest of the two suspect robbers who managed to escape.

Read the full statement of the Police below

Calm has returned to the campus of the Kwame Nkrumah University of Science and Technology (KNUST). This is according to...

Seven people are in the grips of the police for their alleged involvement in the killing of an old man... 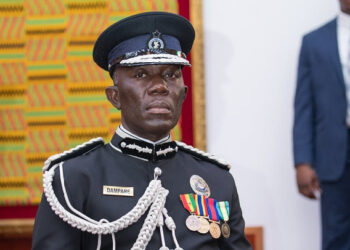 The Inspector General of Police, George Akuffo Dampare, has put in stringent measures to beef up security in the country....

Security Analyst, Adib Saani, has said that the directive announced by the police that it will be replacing fallen officers...