For those wondering why the Vice President, His Excellency, Dr. Mahamudu Bawumia, seems to have been on a low profile aside his official duties, to the extent that even his 58th birthday was observed low-key, with the cured lepers at the Weija Leprosarium in the Weija-Gbawe Municipality of the Greater Accra Region, there is good news.

Handlers of the Vice President’s communications have told Newsreel that the Economist may not be his usual self until after the final funeral rites of his late mother, which has been slated for 24th October this year. What it means is that aside him attending to official duties, Dr. Bawumia would not be engaging in many activities that would keep him in the public’s eye for now.

“You, the mother’s death really hit him hard. So he has been out of the public view, aside his official duties, for now. He would be involved more in other activities after the mother’s burial. That is why, if you observed, during his birthday, there were not the normally noisy birthday wishes. He only went to Weija to celebrate with the patients there,” Communication handlers with knowledge about the Vice President’s itinerary told this paper over the weekend.

Accompanied by his wife, Samira, and Father Andrew Campbell, Dr. Bawumiah served the lepers with breakfast during the visit last Thursday.

He pledged his continuous support for the cured lepers and ensure their welfare at all times.

Dr Bawumia, who is a Patron of Lepers Aid Committee, donated a big cow, 100 bags of rice, 100 cartons of bottled water, 50 cartons of mineral drinks, and GH¢10,000 cash to the Weija Leprosarium for their upkeep.

“It gives me a lot of happiness to spend time with lepers and so on my 58th birthday, I don’t need to think about where to celebrate it but with the cured lepers here,” he said.

The Vice President extended the facilitation of President Akufo-Addo to the lepers, noting that the President often enquired about the welfare of the cured lepers and was prepared to support and make them happy.

“The President is very keen about the welfare of lepers and always ask me…how are the cured lepers doing? …And because am a patron of the Lepers Aid Committee I, from time to time, brief the President about the ongoing projects and so the President is paying attention to your needs,” the Vice President stated. 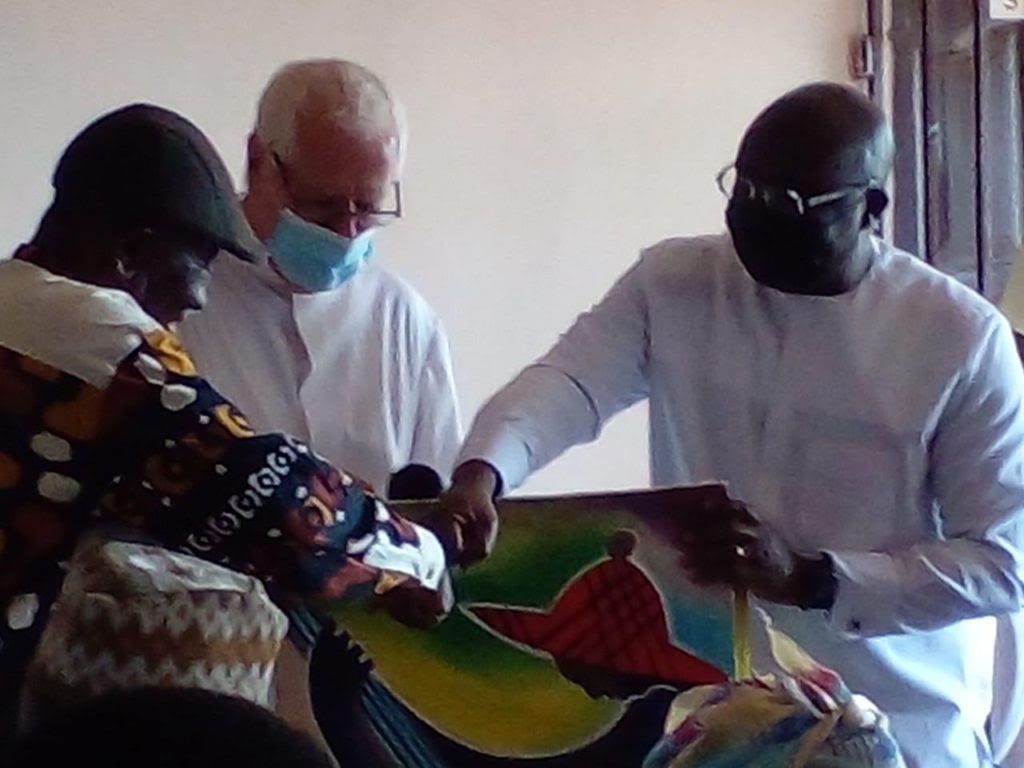 He cited an instance, where the President instructed that all the lepers should be vaccinated against the ravages of the Coronavirus disease.

He noted that lepers were often ostracised by society and urged all and sundry to welcome them, saying; “Let’s make the lepers feel good and welcomed, there is nothing wrong eating, touching or talking to a cured leper,” Dr Bawumia added.

Dr Bawumia inspected a new 40-bedroom hostel accommodation facility for the cured lepers, a research centre, and a newly constructed residence for Reverend Father Andrew Campbell, Chairman of the Lepers Aid Committee and an advocate of the welfare of lepers.

Father Campbell thanked the Vice President for his continuous support to cured lepers and asked for more support in terms of equipping the new laboratories in leprosariums in Weija, Ankaful, Ho, and Wa.

He appealed for an increase in lepers’ allowances under the Livelihood Empowerment Against Poverty (LEAP) Scheme, and also captured those yet to be enrolled onto the Scheme.

Mr John Ampao, a cured leper, on behalf of his colleagues, thanked the Vice President for the kind gesture and prayed for a long life for him and Allah’s continuous preservation and blessings.

The cured lepers presented a beautifully designed painting to the Vice President in appreciation of his good deeds and care.

Recall that Dr. Bawumia announced the denise of his mother via a post on his Facebook page, and said the demise occurred on Monday, September 13, 2021.

Reports say the late Hajia Mariama Bawumia had been unwell and hospitalized over the past few weeks.

She was buried on Tuesday, September 14, 2021, in Walewale in line with Islamic tradition.

Photos: Man kills friend he saw dating fiancée in a dream, 2 others at Kwabre Wawase

Funny Face goes after LGBTQI advocates, says he will chase them out of Ghana

The new Governing Board of the Civil Service Council has been sworn into office, with a call on members to...

Vice President Dr Mahamudu Bawumia has taken a swipe at critics of government’s impassioned drive to digitise the country’s economy.He stressed that...

All internal auditors to sync with Internal Audit Service – Bawumia

Vice President Mahamudu Bawumia, has announced that all Internal Auditors will soon be brought under the new Internal Audit Service,...

FLASHBACK: 79 projects under 1D1F ready to be implemented – Bawumia

In November 2018, Vice President Dr Mahamadu Bawumia announced that 79 projects were going to be rolled out under government's...

Funny Face goes after LGBTQI advocates, says he will chase them out of Ghana