Chelsea centre-half Antonio Rudiger is “determined” to join Real Madrid in the summer transfer window, according to a report from Spain. Here, Express Sport looks at four defenders Thomas Tuchel could bring in to replace Rudiger if he leaves the Premier League giants.

Rudiger has been a revelation since Tuchel took charge, with the defender a key man as Chelsea look to build on last season’s Champions League triumph with a challenge for the domestic title.

But his form has caught the eye of Europe’s top clubs, and with Rudiger now in the final nine months of his contract, the Stamford Bridge outfit could lose him for nothing next summer.

The 28-year-old has been linked with Madrid, with Spanish publication Marca reporting over the weekend that he is ‘determined’ to join Carlo Ancelotti’s side.

Tuchel will look to some of the continent’s most promising centre-backs if Rudiger does leave – and Express Sport has picked out four of them.

Chelsea were frustrated in their pursuit of Jules Kounde this summer, with Sevilla standing firm on what is believed to be a £77million release clause.

Sevilla boss Julen Lopetegui told Diario de Sevilla: “Kounde in the end has stayed because the club has decided that it was the right thing to do based on the evaluation of the offers they may have had.”

There were reports Kounde was frustrated by his club’s refusal to sell, but the 22-year-old has continued to be a key player, helping third-placed Sevilla keep four clean sheets in his six La Liga starts so far this season.

Bayern Munich defender Niklas Sule was touted as a potential alternative target to Kounde during the summer transfer window.

And links to Chelsea have resurfaced, with the 26-year-old’s contract talks having stalled, according to SPORT1.

The German publication says Sule looks likely to leave when his current deal expires next summer, despite having started every game bar one for the Bundesliga leaders this season.

Maxence Lacroix was another defender Chelsea were linked with in the summer, having helped Wolfsburg to the second-best defensive record in the Bundesliga last term.

Wolfsburg sealed a Champions League place as they conceded just 37 goals in the German top flight – less than every team other than second-placed RB Leipzig, who were reported to have a £15m bid for Lacroix rejected.

Sporting director Marcel Schafer was hopeful the promise of top-level football would help keep Lacroix at Wolfsburg, and so it proved.

But if a place opens up at Chelsea, it could be a tempting prospect for the youngster, who is contracted until 2025 and valued at around £25m.

Pau Torres decided to stay at Villarreal this summer, amid reports of interest from Tottenham and Manchester United.

United opted for the experience of Raphael Varane, but El Confidencial reported that Spurs tabled an official bid of £51m (€60m) for Torres.

“I was informed of Tottenham’s interest, but I have always been clear that I wanted to stay at Villarreal,” Torres told AS last month.

The 24-year-old has also previously been linked with Chelsea – and he could make a different decision this summer if Tuchel’s side come calling, despite being contracted until 2024.

GHS alarmed at increase in hypertension, diabetes cases in the Greater Accra Region 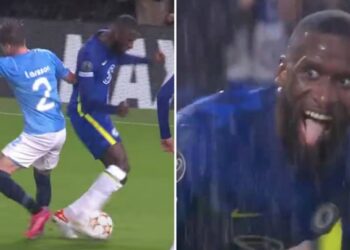 No footballer has ever enjoyed winning a penalty more than Antonio Rudiger did on Wednesday night. Defending European champions Chelsea beat Malmo...

Antonio Rudiger is into the final year of his Chelsea contract; defender is in talks with the club but is...

Antonio Rudiger is about to make the same mistakes that Willian made, and how it will cost him.

Antonio Rudiger is about to make the same mistakes that Willian made in 2020, and it did not go down...

GHS alarmed at increase in hypertension, diabetes cases in the Greater Accra Region