The US based Ghanaian investigative journalist, Kevin Ekwow Badu Taylor has release a hard ‘knock’ on the former First Lady Nana Konadu Agyeman-Rawlings.

Kevin Ekow Badu Taylor, who is the host of ‘with all due respect’ on LOUD SILENCE TV, has claimed that, Nana Konadu Agyeman-Rawlings was very loud against the NDC, during John Mahama’s leadership, but has become silence now during this current NPP administration despite the difficulties in the country.

According to Kelvin Taylor, the former First lady was very vocal during John Mahama’s rule as a president. He said Madam Rawlings was very busy condemning the then president John Mahama; and doing everything possible to tarnish his image as a president; but now has become very quite during President Nana Addo’s bad leadership. Kelvin added that, because Madam Rawlings wanted to lead the NDC; and become president before late former President John Atta Mills… but was not given the chance by the NDC party, she got angry and started attacking and destroying the National Democratic Congress (NDC).

Speaking on his show ‘with all due respect’ on LOUD SILENCE TV, Kelvin stated that, Madam Rawlings’s actions against the NDC have tarnished the image of her own children. 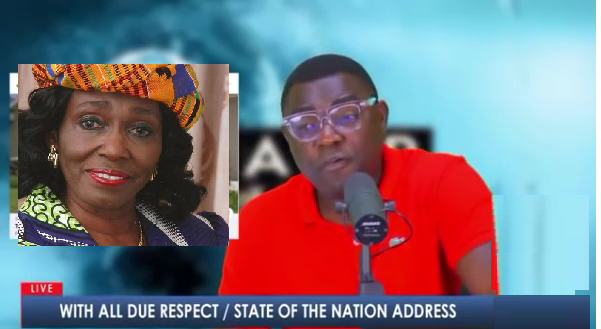 Jerry Rawlings’s widow Nana Konadu …, who was an active member of the NDC, broke away to form her own political party-National Democratic Party (NDP), and became the presidential candidate of the party and also the first woman in Ghana to contest a presidential election.

During her 2016 election campaigns, Madam Rawlings was seen everywhere descending heavily on the ruling NDC led by John Mahama, and advising Ghanaians to vote Mahama out of power, due to high cost of living, and mismanagement of the economy.

Shipping agencies must be owned by Ghanaians – Asaki Awingobit

The shocking image of Samir Nasri in retirement

Nana Konadu Agyeman Rawlings might have seen it all politically and should have, perhaps, never been dragged into any public...

Wife of the late former President Jerry John Rawlings, Nana Konadu Agyeman-Rawlings, has received a book written to honour the...

A former Deputy General Secretary of the National Democratic Congress (NDC) Koku Anyidoho has told members of the NDC who...

US-based Ghanaian Journalist, Kevin Ekow Taylor has projected that the NDC already stands a 60% chance of winning the 2024...

The shocking image of Samir Nasri in retirement